The Black Dog of Inglesham

No collection of British legends and folklore would be complete without its black dog story. Accounts of black dog hauntings appear all over the British Isles with almost every county having at least one example. Reports describe them as varying in size and stature from that of a large retriever to being the size of a horse. They have large glowing eyes that are either red or green. Known variously, according to the region in which they appear, as the Gurt Dog (Somerset); the Black Shuck (Norfolk and Suffolk); Devil,s Dandy or Dando Dogs (Cornwall); the Yeth or Yell hound (Devon). Other local names include the Barghest, Black Shag, Padfoot or Hooter and Guytrash.

The appearance of these dogs, which occurs only at night, is said to bode ill to the beholder, foretelling either their death or that of a close relative. Occasionally though some, like the Gurt Dog of Somerset, are said to behave benevolently.

According to folklore these dogs are often to be found near gates and stiles and to haunt graveyards, crossroads, ancient pathways, and boundaries. They also appear to provide a very specific spiritual guardianship, guarding the road to the land of the dead or the underworld. In most old parishes the customary road or path taken by funerals was known as the Church Way, Corpse Way, or Coffin Path. In the centre of a village this was usually the ordinary hard road but funerals from outlying hamlets probably travelled over a path running for some of the distance over fields. It has been suggested that the name Barghest came from the German Bargeist, the spirit of the funeral bier which would fit well with the concept of the guardian of the corpse ways. 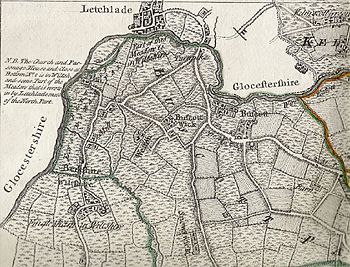 Wiltshire has at least forty recorded stories of a black dog including one at Inglesham mentioned briefly by Alfred Williams in his book Round About the Upper Thames. Unfortunately he gives very little detail but the old boundaries between Wiltshire, Gloucestershire and Berkshire are very close together in this area as can be seen in J Rocque,s map of 1761, (see left).

There is also a footpath running directly across the fields between Upper and Lower Inglesham where the Anglo Saxon church of St John the Baptist is to be found. The dead of Upper Inglesham would have been carried along this route for burial crossing the running water of the river Cole which it was believed the spirits could not cross.

The dog was either likely to have been guarding the boundaries or was acting as a psychopomp guiding the spirit to Otherworld. You must make up your own minds regarding this tale but remember to take care with just whom or what you choose to go walkies with across the fields to Inglesham.