For a town in the Victorian age to be without a railway was unthinkable. When it was only five miles from Swindon it was unbelievable and yet until 9th May 1883 that was the situation in which Highworth found itself. 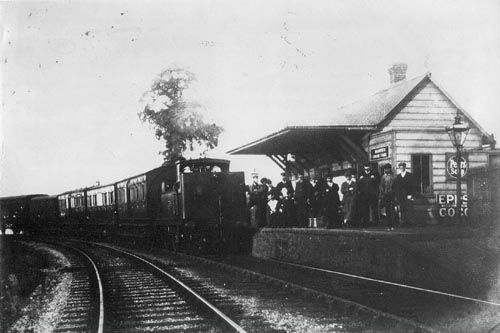 This certainly was not for the want of trying, indeed various schemes had been proposed for the area since 1832 when the town nearly found itself on a main line route between Gloucester and London . That honour, of course, went to Swindon some years later but had the original proposal gone ahead then the history of Highworth could very well have been substantially changed. Other less ambitious schemes were suggested in 1845 and 1864 but again nothing came of them. Then, in 1873, the population of this corner of Wiltshire decided that if no one else was going to do anything for them then they would have to do it themselves. To this end Mr. Ambrose Dennis Hussey-Freke chaired a meeting called on 24th September 1873 to discuss the possibility of building their own line. Support from the villagers whose homes lay along the proposed route was very good and a professional engineer, Mr. Arthur Pain, was called in to make a survey, the results of which were placed before Parliament during the 1875 session and given the seal of approval on 21st June of that year.

The company was authorised to build a light railway from Swindon and run via Stratton, Stanton, Hannington and terminate in Highworth and to raise funds by the sale of shares to the value of £28,000 in total. Sales were slow despite the offering of 2s. 6d commission to anyone who sold a share on behalf of the company. Although many men made extra beer money from this no direct proof that the Arkell’s were behind the scheme can be found! Indeed, it took over three years to raise enough capital to hire a contractor.

The shares never were sold in total and a local building firm, that of James Hinton and James Haynes, finally accepted £8,500 worth as part payment for constructing the line.

Bad weather throughout the winter of 1878 delayed the spade work still further and so the first sod was not cut until 6th March 1879, after yet another night of heavy rain. At the ceremony a small area had been roped off for the ladies and dignitaries but so many people crowded into it that the rope gave way leaving these once dignified people in an undignified heap! The band continued to play unconcernedly according to the local newspaper. Despite many problems besetting the work, chief of which were bad weather, shortage of materials and needing another £8,000 loan as the original estimate had been grossly inaccurate, the line was ready for inspection by the Board of Trade on 5th March 1881. Col. Yolland, the inspecting officer, refused to grant permission for the line to operate commercially until some fourteen major faults had been rectified and as the Swindon and Highworth railway company was effectively bankrupt they had little option but to sell out to the G.W.R.; this step being taken at a meeting in the Board Room at Paddington on 7th June 1882.

Altogether, the G.W.R. spent £18,000 in carrying out the proposals made by the B.o.T. and when Major Marindin carried out the second inspection on 30th April 1883 he could not find any reason to withhold the opening which occured on 9th May.

All trains on the branch carried the nickname “bunk” and the reason for this is somewhat obscure. It is suggested however that in the early days of the service a young man visiting friends in Highworth became delayed by an excess of the grape and returned to the station just in time to see the last train of the day leaving. It is said he then spent the remainder of the night complaining that his train had “done the bunk”!
However, the more probable reason for the nickname is that the motive power was a tank engine which, unlike a main line engine, did not have a tender for the coal but was provided with a bunker instead. These tank engines became known as ‘bunks’ among the railway staff and therefore the Highworth trains became known as the Highworth bunks.

The line settled down to give many years service to the local communities along it. The four stations, built at or near the previously mentioned villages, handled both the passenger and not inconsiderable freight traffic with ease. Milk was by far the most important product carried with up to five milk vans, or “siphon” vans as the G.W.R. coded the vehicles, coupled to the rear of the morning passenger train.

A new lease of life was granted to the branch during the Second World War when a spur was built to the Vickers Armstrong aircraft factory which introduced workers’ trains of up to eight coaches onto the line.

Sadly, this state of happy contentment could not last and the Highworth branch was destined to go the way of so many others. Despite some attempts to attract traffic, the quicker bus service and increase of private car ownership after the war gave the operating authorities little choice but to announce that the branch was to be closed to public passenger traffic from 28th February 1953. The last train was the 6.05 p.m. from Swindon on that evening and its respective return working, the locomotive being number 5800.

So that was the end, but not quite!

Long before Highworth had had a railway, groups of men used to walk to work in Swindon and back again at night. Even after the opening the trains were not well suited to the men’s needs and, after several representations, special trains were laid on whenever the works (G.W.R.) were open. These trains, not being available for public use, were unaffected by the 1953 closure and lived on, together with a daily freight service, until 3rd August 1962 when the line was closed to all traffic above Kingsdown Road. The last train of all to use Highworth was the empty coaches return to Swindon which departed the terminus at about 6.30 p.m. behind diesel number D2182.

by G. Heathcliffe (This article first appeared in the 1984 Highworth Festival Brochure).