In his Natural History of Wiltshire John Aubrey comments:

‘At Highworth was the greatest market, on Wednesday, for fatt cattle in our county; which was furnished by the rich vale; and the Oxford butchers furnished themselves here. In the late civill warres it being made a garrison for the King, the graziers, to avoid the rudeness of the soldiers, quitted that market, and went to Swindon, four miles distant, where the market on Monday continues still, which before was a petty; inconsiderable one. Also the plague was at Highworth before the late warres, which was very prejudiciall to the market there, by reason whereof all the countrey sent their cattle to Swindon market, as they did before in Highworth’.

In the mid-17th century Welford, then owner of Highworth’s market and fairs, sold them to a lawyer, William Blomer (sic) of Hatherop and in 1672 the ‘profits, customs and tolls’ were purchased by his brother John Bloomer of Hatherop for £700. On his death they passed to his sister Dame Mary and her husband Sir John Webbe of Canford, Dorset. In 1686 they sold the rights to Thomas Freke of Hannington for £800 suggesting that the markets and fairs had regained their previous prosperity.

It was this Thomas Freke who had the market house built for the ‘farmers and traders to stand out of the rain and for the safe storage of their corn and other goods’. The weights and measures, including a common weighing beam and a brass dish belonged to Freke. These were stored in the upper rooms together with the records of the tolls paid. Cubbs or stalls were also stored underneath the house.

The Highworth Historical Society has a two-page document, regrettably undated, described as ‘The Toll Book of the Markets and Fairs of Highworth’. This sets out the rules regarding the sale of horses. It is signed by William Freke, Lord of the Market. It is unclear whether this is the William Freke who died in 1657, or the William who died in 1744. It is probably more likely to be the latter but further research needs to be done on this.

The Freke family retained the rights and in 1725 commissioned a ‘Survey of the Profits’. This revealed that the charge for traders setting up stalls was one penny, the toll for sheep four pence per score, for cattle two pence each, for horses four pence and for pigs one penny. The survey lists in detail the stalls, standings and pens for livestock along the streets and on the waste ground at the south end of the town. It also identifies the alehouses and dwellings which had the right to sell goods, paying one penny each for the privilege. Toll on grain sold in the market was levied by means of ‘the Brass Dish used for the purpose (containing about one pint) out of each Four Bushells and so in proportion ‘. Further income for the owner came from the use of the Market House and the rooms over it and from a charge of one penny for each use of the beam weights. The total income to the Freke family from the markets and fairs was said to amount to about £50 per annum.

By the 17th and 18th centuries dairy farming had become the main business of north Wiltshire. The fattening of cattle, sheep and pigs was secondary to it. One of the chief reasons for this was the change to the pasturing of Longhorn cattle. They were considered to be the ideal all-purpose breed for the period. Their size and power, coupled with a quiet temperament, made them ideal as draught animals and their milk was especially suited for the making of butter and, especially, cheese. They were also good beef cattle which could walk many miles to market. Dairies of up to 100 cows, with some as large as 200, were assembled in spring from Highworth which was a centre for Staffordshire and other Midland stock. It has been estimated that nine-tenths of the farmers had these north country English Longhorn cattle.

Most farms in the area were producing cheese of a very high quality. South Marston was famous for the excellence of its cheeses. The majority of north Wiltshire cheeses were sold as single or double Gloucester with a smaller quantity of Wiltshire loaf cheeses being produced.

Daniel Defoe, writing in 1724-7, commented on the north Wiltshire trade in cheeses, bacon and malt taken along the river Thames by barge to London. Some of this would doubtless have left from the wharves at Buscot and Lechlade. Apart from the Wiltshire cheeses already mentioned, a green cheese was produced in the spring and traded in May and June. This was thin and soft and ‘universally liked and accepted in London’. Wiltshire bacon too, thought to be amongst the finest in England, was raised in the area. The hogs were fed on the whey and skimmed milk left from the production of the cheeses. Vast quantities of barley were grown in the area which was turned into malt and carried to London. Trade in all these three products would have passed through the local markets, including Highworth. George Farr, Maltster, was able to afford to have the White House in Lechlade Road built in the early 1700’s on the profits of his trade whilst those of Thomas Ewer, cheesemonger, and liveryman of the worshipful company of leather sellers, enabled him to endow the Ewer charity on his death later in the century.

Ownership of the markets and fairs continued in the hands of the Freke family until 13th October, 1843 when Colonel Henry John Freke sold them for £300 to Thomas Ackling, Corn Dealer and Thomas Yeates, Butcher both of Highworth. Ackling did not hold them for long, selling them for £350 some eighteen months later on the 1st April, 1845 to John Phipps. At some point between 8th December, 1852 and the 14th January, 1854 Phipps died, leaving the markets and fairs to his daughter Martha Mary Phipps, then a minor.

It was at about this time that Highworth, together with its markets and fairs, began to decline. Like many other places this decline was because of the growth of the industrial towns and the agricultural depression, and highlights the vulnerability of English towns to forces outside their control. The new Great Western Railway works opened in Swindon in January 1843 providing not only work but a transportation system for the produce traded at their growing market. Enclosure and agricultural mechanisation leading to high unemployment led to a drift away from the land towards the industrial towns. Emigration from Highworth occurred, some going only as far as Swindon but others moving as far afield as America, Canada and Australia. At its peak up to a hundred people left the town every year. 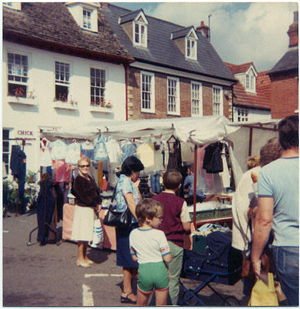 At a meeting held on 29th December, 1858 an attempt was made to revive Highworth’s once thriving market. Captain John Willes Johnson of Hannington Hall together with a committee of twelve townsmen composed mainly of farmers and tradesmen proposed that a monthly market should be established in Highworth to be held on the last Wednesday of every month and that the tolls should no longer be paid.

On the 23rd November, 1859 the sale was agreed and £300 was paid to the trustees and guardians of Martha Mary Phipps. One of these guardians, William Hewer, was also a member of the above committee. Residing at Sevenhampton, he was a noted breeder of high grade pigs.

Highworth’s old Market House, and probably its market cross, had been taken down in the early 19th century to facilitate the movement of traffic through the town. A Toll House was then used for the purposes for which the market house had been used. On 3rd April, 1861 a meeting was held where it was unanimously agreed that the Toll House should be sold by Public Auction for the best price that could be obtained. It was sold at the Saracen’s Head at 7 o’clock in the evening of the 10th April and on 8th May, 1861 was conveyed to Messrs Willoughby and Vines. Storage of the market equipment was moved to the back of the Saracen’s Head inn where it remained until the market ceased in the 1930’s.