As far back as the 22 September 1997 concerns had been expressed by members of the society that a more dignified resting place should be found for the human bones which the society held. The partial remains of two bronze age skeletons were held in the attic of one house whilst the Romano British skeleton was lodged under a bed in another. It was generally felt that the bones should not end up in some museum but should be returned to the good earth as near to their exhumation as possible. 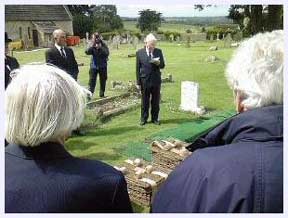 In late 2006 Mrs Lynn Withey of A.& E. Baker, funeral directors was approached for advice on the matter. They wholeheartedly entered into the spirit of the event and, provided we could get the permission of the Coroner and Highworth Town Council, offered to carry out the re-interment free of charge. The whole event was supported by local Highworthians. 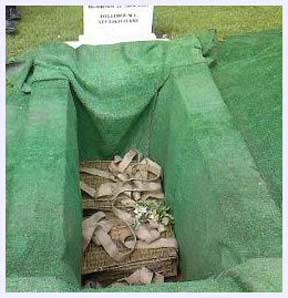 The Coroner, Mr M. Davey, was approached and gave the society his blessing. His letter of authorisation was passed to A. & E. Baker. Highworth Town Council also gave the society their permission and with the help of Paul Tilling and Maurice Miles who tend and look after the cemetery, an appropriate site was found in Highworth Cemetery and the date of the re-interment was set for 21st June 2007. Mr Roy Bacon of Highworth Memorials generously donated the headstone, whilst Mr Les Tyler, gravedigger made a generous reduction in his fees. 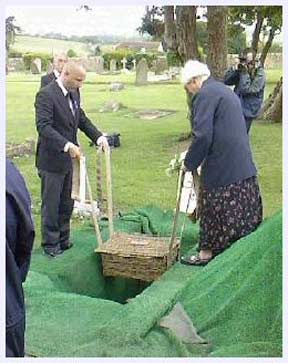 An archaeologist gave his professional advice as to the sex and manner of death of the people being re-interred. All were male and the Romano- British person had died from an axe or sword blow to the left side of the skull.

Mr Brendan Ball, dental surgeon, x-rayed the skulls and extracted one tooth from each of them for any future testing which might be of use in the future. The bronze age skeleton appears to have died of old age, his jaw reflected the wear and tear expected of someone about the age of forty and showed some signs of arthritis. Surprisingly, the Romano British skeleton was found to be a lot younger than had previously been thought. He was placed at between sixteen and nineteen years of age. Dating was done by the evidence of wisdom teeth and the plaque line of the front upper teeth. 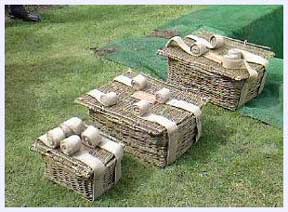 The remains, wrapped in cloth supplied by Mrs Jacky Panting, were placed in wicker caskets which had been made by Mrs Norah Kennedy. Small pots of honey, supplied by local beekeeper Mr Ross Gregory, and mead donated by Mr Maurice Message were placed in the caskets together with coins and the seven sacred herbs of the druids.

The event was attended by the people of Highworth and was reported on by the BBC, ITV and local newspapers. Emma Restall-Orr, head of the international Druid Network and founder of Honouring the Ancient Dead, an advocacy group working within Britain for the dignified treatment of human remains of British pagan provenance, also attended. Professor Piotr Bienkowski, Deputy Director of the Manchester Museum and Professor of Archaeology and Museology at the University of Manchester was also in attendance. 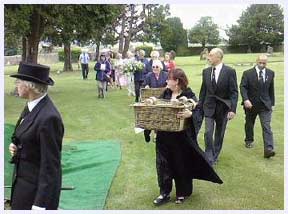 It appears that the event is now spoken of in museum and archaeological circles and conferences as a positive event, proving how the ancient dead can be so important to social coherence and identity within the locality of their exhumation.