Edmund Warneford of Warneford Place, Sevenhampton was a supporter of the Parliamentarian cause. Taken prisoner during the siege of Cirencester he suffered many hardships in the hands of Royalists and died at home at the early age of forty-three in 1649.

His second son, Edmund born in 1642, inherited the estate on the death of his brother, John, in 1662. At the Restoration he declared himself for the King and shortly afterwards was knighted. He married Bridget Paul, daughter of the Bishop of Oxford in 1681, and appears to have been of a rather more flamboyant character than his ancestors.

Sir Edmund was passionately devoted to the hunt, and this was to prove his undoing as he broke his neck whilst rashly continuing to chase after a deer, at night, which had managed to evade him throughout the day.

His ghost was said to haunt the Long Avenue at Warneford, close to where his exhausted horse fell under him in 1700. At the midnight hour he was said to be seen, mounted on Fury his grey, galloping up the avenue from the Chapel of St James, jumping the gates into the grounds of Warneford Place whilst cheering on his hounds. This so disturbed the villagers that the clergy were asked to rid them of this problem. This done, he is said to have disappeared into a pond, where he stays until the pond runs dry.

The ghosts of Warneford Place certainly appear to have liking for the lake close by the house. As with Sir Edmund, the spirit of Sir Charles Wetherall is also said to have ended his haunting career by entering its peaceful waters.

Sir Charles and his wife Harriet are said to have had a very trouble marriage. Two months after his death on 14th August 1847, Harriet believed that she saw his ghost walking beside the lake. She was heard to call out to him “Charles! Charles! You tormented me when you were alive, and you cannot leave me in peace now that you are dead!” 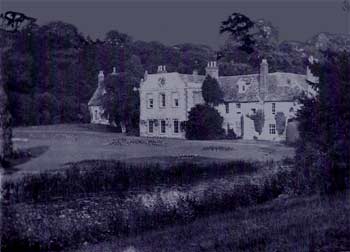 So terrified did she become of meeting his spirit that she called for a gathering of clerics, headed by a Bishop, to come to Warneford to exorcise his restless spirit. It is said that they used the old ritual of bell, book and candle. One night the fearful churchmen lay in wait for the ghost who duly appeared. Old Sir Charles disappeared into a hollow tree, his voice it is said sounded very faint and far away.

He was asked “Was he willing to lie down and rest? Did he have anything he wished to tell? What were the conditions upon which he would receive the quietus?” To all these question he answered in the negative. The only condition he laid down was the sacrifice of a couple of game cocks, taken with a pair of clay gloves, and the presence of twelve parsons who would carry out the ritual.

The next night as the clocks struck midnight the parsons gathered by moonlight at the foot of the tree where Sir Charles‚ ghost was still in residence. They had with them the two game cocks and the clay gloves. The twelve men stood in a ring and read the prayers for the dead as hard as they could. Shortly, the ghost was heard to squeak like a rabbit in the clutches of a weasel. The two cocks were torn violently apart, feathers flew in all directions, and with a shrill cry the ghostly white spirit of Sir Charles emerged and vanished without a ripple into the still waters of the lake. The surface of the water is said to have boiled and foamed returning afterwards to its calm and tranquil state. It is said that the ghost will stay there until such time as the lake runs dry when like Sir Edmund in the previous story, he will reappear.